Gas prices may be climbing, but gas stations aren’t seeing the profits 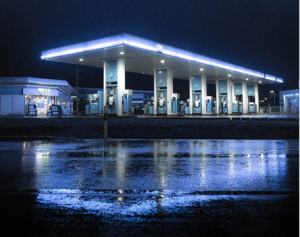 Gas prices are currently at a six-year high. It might be easy to feel frustrated with gas stations when you see the prices steadily creeping upwards. Especially if you’re managing a fleet of work vehicles on top of your own personal transportation. You may be surprised to learn that despite rising prices, gas station owners rarely turn a profit on gas alone.

We consume a lot of gas.

In the past two decades, gas consumption has increased significantly. In fact, the total number of miles driven per year has gone up approximately 20% since 1990 in the United States. The average American household now spends $250 on gas per month. And, despite the lockdowns in 2020, gas stations across the country still sold 123 billion gallons of fuel.

The increase in gas prices and consumption has not meant that station owners see an increased profit. In fact, many of them lose money on their gas overall. With small margins and intense competition, many gas stations rely on secondary revenue streams to stay afloat.

Many gas stations are operated by franchisees or individual operators, 57% of whom only own a single station.  Meaning, for most gas station owners, their income is reliant on the success of an individual location. And, with gas stations averaging a 1.4% net margin on their fuel – far lower than the average across all industries of 7.7% – that success can be difficult to generate.

What goes into the price of gas?

The gas we use to power our traditional Internal Combustion Engine (ICE) vehicles goes on quite a journey from the ground to your car. After being sourced, crude oil is sent to refineries to be processed into gasoline. Then, it is funneled into storage containers and transported to gas stations.

When you purchase gas, the bill is composed of the expenses of these different stages of gas production and transportation:

Based on a September national average in the United States, a gallon of gas costs roughly $3.18. The markup, then, would bring in 20 cents of revenue. Put that 20 cents through labor and other operational expenses, such as credit card processing fees and utilities, the average profit per gallon would be between five to seven cents.

Depending on a station’s traffic, this profit margin might not nearly be enough to keep it running. It can be difficult for operators to raise the prices on their own accord, too. Customers often choose where to fill up based on price alone, so there is an incentive to sell more by keeping the price down.

Gas station owners are affected as much as anyone else when the cost of gasoline rises. They are faced with the difficult decision of choosing to keep prices steady, at a loss to themselves, to maintain customers. Competition over who can provide the lowest price and attract more customers can also put gas profits at significant risk.

So, how do stations stay open?

For the stations open today, many make a profit off of secondary revenue streams. In the United States, 80% of all gas stations have a convenience store on site. Convenience store goods, such as chips, lotto tickets, and beverages, account for an average of 30% of a station’s revenue, but 70% of the profit.

While 44% of customers still choose to go inside gas stations to pay, the advent of pay-at-the-pump chip readers is threatening this business model.

What can gas stations owners do?

While this incredibly competitive, challenging industry can be hard to make more profitable, there are ways to reduce costs without losing staff.

If the 7% that revenue station owners make off gas also goes towards expenses like card processing, utilities, and other operating costs, then lowering these costs is a way to increase profits. Working with a bookkeeper or cost reduction consultant to manage these expenses can help you do just that.