Waste Across Industries, No. 4: Can exorbitant medical waste costs be avoided? 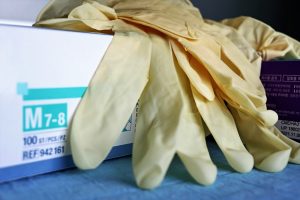 Medical waste is an incredible burden on the healthcare industry. In the United States alone, between $760 billion to $935 billion is wasted every year through overtreatment, poor coordination, and other factors leading to waste generation. This issue has only grown worse with the advent of COVID-19.

If your hospital, clinic, or healthcare practice is suffering under the financial stress of medical waste disposal expenses, there are steps you can take to optimize your procedures, reduce waste, and cut costs.

In the previous edition of Schooley Mitchell’s series on waste across industries, we took a deep dive into the gargantuan amount of waste generated by construction and demolition projects. This week, in our fourth issue, our focus is the healthcare industry.

Waste may or may not be a significant issue for your practice, but if we zoom out and look at the problem at an industry level, it’s a goliath. Here are some facts about medical waste:

Where is waste generated?

When you think of medical waste, you probably think of a lot of single-use and hazardous items. However, it’s not all used syringes and tongue depressors. While some waste is inevitable, others are generated from oversights, poor planning, and lack of knowledge.

Much of the waste generated in hospitals, especially during surgery, comes down to an incongruity between supplies requested versus supplied needed and used. This can cost a hospital millions of dollars every year, depending on how many operations they perform.

Likewise, a lack of recycling awareness in hospitals contributes to waste generation. The Mayo Clinic conducted a study of more than 500 hospital staff members and found that 57 percent did not know which items could be recycled; 39 percent said they sometimes or never recycled; and 48 percent said “lack of knowledge” was the greatest barrier to recycling at their facility.

Some materials can be rethought.

UCLA Medical Center is a perfect example of how this source of waste can be rethought. In 2012, it switched to reusable isolation gowns, which diverted 300 tons of waste from landfills and saved over $1.1 million in purchasing costs over a three-year period.

One of the obvious ways to reduce your medical waste expenses is to cut back on the amount of waste your practice is generating. Supply shortages during the pandemic have led to innovations and strategies to cut back on waste and reuse supplies; decontamination and reuse is one such strategy.

While many medical materials and supplies cannot be reused, some that are often thrown away after a sole use are actually completely reusable. The Food and Drug Administration (FDA) has said surgical instruments such as clamps and forceps can be decontaminated, reprocessed, and reused.

The pandemic taught healthcare workers a lot about sterilization. The Centers for Disease Control and Prevention (CDC) has granted many hospitals approval to use ethylene oxide and vaporized hydrogen peroxide – which were used to sterilize N-95 masks – to sterilize other previously single use items as well. This method could go a long way in reducing waste generation and expenses.

Another step to take is auditing your own waste. A San Francisco hospital asked its surgeons to reduce waste, and just by studying and understanding how waste was being generated in the operating rooms, they were able to cut back by 6.5 percent. Some of the measures hospital administration and practitioners can take includes rethinking packaging, working with suppliers to reformulate your facility’s surgical packs, and take better inventory of what items go to waste without ever being used.

Medical waste is a huge issue and has spiked in the past year and a half. A lot of the waste-related expenses come down to single-use disposable materials and supplies that are ordered, but never used. Luckily, there are concrete steps that can be taken to reduce costs.

In the final installment of our five-part series on waste across industries, we look at how your business can save money by recycling.