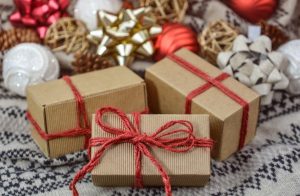 More gatherings. More food. More gifts. The holiday season often means an excess of things, but did you know it also means more waste? In fact, Americans throw away 25% more trash during the time between Thanksgiving and New Year’s than any other time of year. This amounts to 25 million tons of garbage. So, what can we do about it?   In this article, we’ll share five tips on how to reduce the amount of waste your business produces during this time. These can be applied beyond the holiday season as well.

According to Feeding America, 108 billion pounds of food is wasted in the United States each year. About 61% of this, or 66 billion pounds, is commercial waste. Sadly, this is food that is safe to eat, but may have been thrown out simply because it was leftover at the end of the night, or it didn’t meet the retailer’s standards based on its appearance. Thankfully, organizations like Feeding America partner with food manufacturers, grocery stores, restaurants, and farmers to rescue food and deliver it to food banks, so this doesn’t have to continue happening.

If your office is holding a potluck or cookie swap this holiday season, encourage your employees to bring their own reusable containers. It may not seem like a lot, but plastic plates, cups, and cutlery can quickly add up. For example, if you have 120 employees and they each use a plate, fork, and cup, that’s 360 pieces of plastic added to your garbage bin that weren’t there previously. If you can’t go reusable, consider alternatives, like bamboo, which can be composted.

Oftentimes, gifts given to staff, while well intentioned, are things the employees don’t want or need and therefore, end up in the trash, sooner rather than later. Instead, consider giving your staff an eco-friendly gift, like an e-gift card. This is a win-win because it doesn’t produce extra waste and allows them to get something they’d enjoy.

If you have a retail business that offers gift wrapping, or if you plan on giving out gifts to your employees, consider using recyclable wrapping paper. Earth911 estimates that approximately 4.6 million lbs. of wrapping paper are produced in the United States each year, and that about 2.3 million pounds of that ends up in landfills. The shiny, laminated wrapping paper most of us are used to is not typically recyclable, so it either ends up in the garbage or is mistakenly put in the recycling bin, which can then make the entire load unrecyclable, leading to even more waste. Wrapping paper that is textured, metallic or has glitter on it, is also not recyclable and should be avoided.

Divert to recycling and green bins

The holidays are a busy time but ensuring you and your staff are still diverting your waste into your recycling and green bins, when possible, will ensure your waste production isn’t unnecessarily increasing. If you don’t have a recycling or green program set up yet, it might be worth looking into after the busy season has passed and you have more time on your hands.

The holiday season can create a lot of unnecessary waste, but there are ways we can help reroute some of it from ending up at the landfill. If we all do our part, it could have a huge impact.