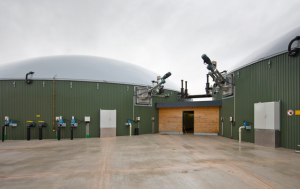 In Penobscot County, Maine, a fifth-generation cattle farm has adopted a brilliant way of reducing waste, creating clean energy, and offsetting the cost of running their facilities.

Nearly a decade ago, Stonyvale Farm installed a waste management system to handle the excess manure produced by its cows. The system loads manure into large, heated tanks filled with microbes, which then generate electricity using anaerobic digestion – a process similar to fermentation. Before long, the farm added food waste to this process; which ended up being more effective, with the same carbon footprint.

Sponsored by private companies and government grants, Stonyvale Farm has expanded its facilities and now brings in truckloads hauling tons of food waste from across Maine, and even from out of state, which, when fully operational, produce enough energy to power 2,500 homes.

Stonyvale Farm is not the only facility of its type – there are a few dozen across the country with the same capacity and several smaller farms working with just manure. However, with more government grants and private funding, this is looking to be an upcoming trend in both reducing food waste and promoting clean energy.

So what is anaerobic digestion?

As explained by the Environmental Protection Agency (EPA), anaerobic digestion (AD) is the process through which bacteria breaks down organic matter in the absence of oxygen.

In a situation like at Stonyvale Farm, the organic matter – in this case manure and food waste, but in other cases it could be wastewater biosolids, fats, oils, and other organics as well – are placed “in a sealed vessel called a reactor… These reactors contain complex microbial communities that break down (or digest) the waste and produce resultant biogas and digestate (the solid and liquid material end-products of the AD process) which is discharged from the digester.”

For a visual representative of this process, the EPA has created the following diagram: 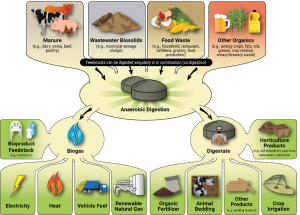 AD has several benefits for farms, municipalities, and other businesses, including:

AD as an energy provider.

Anaerobic digestion is an incredible energy alternative that could have significant grassroots impacts. Not only can AD systems generate enough electricity for lighting and heating barns and homes, sustain greenhouses, and run refrigeration systems, but – as in the case in Maine – it can provide electricity for the local grid as well.

Likewise, the biogas created from anaerobic digestion of manure is composed of over 50% methane, which happens to be the majority component of renewable natural gas. However, AD is a far less pollutive way of capturing methane than traditional methods.

Some farms and businesses with AD systems can even power fleets of long-haul trucks using the biogas created from their manure, food waste, and other organics.

AD offers farms and businesses an out from relying on fossil fuels and non-renewable energy sources, as well the opportunity to help power their communities. In terms of the future of clean energy, it is a very exciting prospect.

AD as a solution for waste disposal.

Food waste is a big problem in North America. It is estimated that 30-40% of all domestically produced food goes unsold or uneaten. Most of this waste happens at the end of the supply chain; in consumer homes, grocery stores, and restaurants.

While some regions have composting programs, and some businesses have adopted their own measures to tackle food waste, it’s still a pervasive issue filling North American landfills.

Anaerobic digestion offers a community-based solution to this ever-growing problem. Local farms and businesses with AD facilities can partner with community grocers and restaurants to accept food waste – benefiting both businesses immensely. For the restaurants and grocers, this kind of partnership could significantly cut down not only their carbon footprint, but their waste disposal bill as well.

This isn’t just a rural solution.

It’s more than just the agricultural sector and rural businesses that can benefit from this technology. Due to the largely odorless nature of the digestion facilities, population-dense areas can sustain AD facilities too.

The Houston facility is expected to be completed by late 2024 and will purportedly “divert about 300,000 tons per year of organic wastes from nonsustainable outlets, providing companies in the region who wish to make their operations more environmentally friendly a sustainable choice.”

In Canada, local governments are investing in AD infrastructure as well. For example, Whitby, Ontario is expected to build a “Mixed Waste Pre-sort and Anaerobic Digestion Facility” as a part of the region’s long-term waste management plan. This comes alongside the news that a private AD facility, owned by Evergreen Environmental, has recently been opened in the neighboring city of Oshawa.

From dairy farms to metropolitan areas, anaerobic digestion offers a creative solution to growing waste concerns, the need for renewable energy, and has several benefits to businesses and households alike.