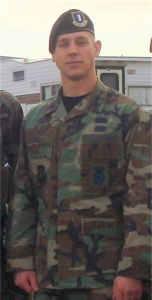 If you asked the staff at Schooley Mitchell Head Office to name a franchisee who always makes them smile, many would name Adam Baker. From his warm demeanor, dedicated professionalism, and uncanny ability to make every person he works with feel valued, Adam is truly a cherished member of the Schooley Mitchell family. He is also one of the veterans we are proud to recognize and appreciate in the month of November.

Before venturing into a career in business, Adam led a distinguished career in the United States Air Force, including service in Iraq.  For eight years, after being commissioned through ROTC, University of Pittsburgh, Adam served his country as a Security Forces Officer.

During his time as a Security Forces Officer, Adam was entrusted with many important responsibilities, the success of which were matters of global importance. While in combat in Iraq, Adam led forces that provided internal and external security for an operating base that housed a theater internment facility, in which a significant portion of the country’s Al Qaeda leadership were imprisoned.

On top of his critically important work, Adam’s time in the military introduced him to the principle which is the heart and soul of Schooley Mitchell – cost reduction!

As Adam explains, “Just prior to our deployment, the United States Government began investigating cost savings strategies that would help lower the cost of the war without negatively impacting the war fighting effort. I was selected to oversee one of the initiatives and that was my first taste into how an organization can effectively reduce costs without impacting its operation or culture.”

Who could have predicted that in the not-so-distant future, Adam would be doing cost reduction work full time and uplifting his community throughout the process?

It is abundantly clear that Adam’s years in the Air Force were not only an example of incredible service to one’s country, but also helped shape him into a true leader, in his personal life, in business, and his community of Erie, Pennsylvania.

Adam credits a lot of this personal development to his role models and superiors in the Air Force:

“During my time in the service, I had great leaders that were relentless in their pursuit of excellence.  When we came up short, we were trained to look at our own failures and fix those first before we looked at external causes of failure.”

Adam also says that these leadership lessons were crucial in helping him prepare for franchise ownership:

“This mentality aligns well with franchise models because any setbacks or failures almost always lie at the feet of the franchisees – the models work if you follow them.”

It is this sense of self-responsibility, accountability, and growth mindset that has not only made Adam a strong example of franchisee success in our system, as well as an absolute pleasure for everyone – from Head Office, to clients, to community contacts – to work with. Adam always takes the time to promote local businesses, recognize the accomplishments of his colleagues, and go out of his way to show kindness. Blending good business practice with community spirit is truly one of Adam’s superpowers.

We are incredibly thankful for the diligence of individuals like Adam, whose hard work keeps us safe every day, and we couldn’t be happier to call him a part of the Schooley Mitchell family!

About the Author: Christine Wilson is a communications specialist for Schooley Mitchell.